The meta-rank (Beta) combines the top rankings from the most respected publishers into a single grade.

Thomas Aquinas College received a A.

Washington Monthly's ranking of 76 out of 224 of Affordable Elite Colleges - Overall Rank was a major contributor to this grade.

Find more about our methodology here 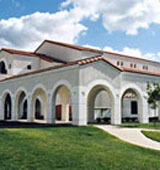 "This California liberal arts school provides a unique education. No classes exceed 20 students and there are no majors, textbooks, or lectures. Instead, Thomas Aquinas students read directly from the original works of Aristotle, Einstein, and, of course, Thomas Aquinas, and the rest of Western Civilization's greatest philosophers. "Tutors" lead classes by asking thought-provoking questions."

"This California liberal arts school provides a unique education. No classes exceed 20 students and there are no majors, textbooks, or lectures. Instead, Thomas Aquinas students read directly from the original works of Aristotle, Einstein, and, of course, Thomas Aquinas, and the rest of Western Civilization's greatest philosophers. "Tutors" lead classes by asking thought-provoking questions."

Because of the school's unique curriculum, candidates must demonstrate a penchant for scholarship.

In the fall of 1971, a small group of scholars set out on a mission that was both audacious in its scope and humble in its reliance on Divine Providence. With neither an endowment nor a steady stream of revenue, with a freshman class of just 33 students, and with only the leased site of a shuttered seminary for a campus, these men inaugurated the first semester of classes at Thomas Aquinas College.

Founded at a time when many Catholic institutions were straying from their loyalty to the teaching Church, Thomas Aquinas College would, by contrast, strive for fidelity to the Magisterium. In place of the burgeoning multiplicity of majors, minors, and electives elsewhere, it would offer a single, integrated curriculum employing the liberal arts and sciences in the pursuit of truth and wisdom.

In lieu of textbooks and lectures, this college's students would study only original works -- the great books of Western civilization -- and examine, sometimes refute, and invariably learn from their claims in small classes that employ Socratic discussions. Moreover, the academic program would be ordered to the study of God in precisely the manner in which the Church has for centuries prescribed, according to the mind of Her Universal Doctor, St. Thomas Aquinas.

Four decades later, on a beautiful campus neighboring California's Los Padres National Forest, stands the Thomas Aquinas College of today -- a witness to its founders' faith and diligence. The College's ranks have swelled to the maximum capacity of 350 students, and a roster of distinguished faculty has expanded accordingly. While holding true to its founding vision, the College has earned a national reputation for academic and spiritual vigor, becoming a model for the many new, faithful Catholic schools that have followed. Through God's grace, it has also graduated generations of alumni who have gone on to faithfully serve the Church and society in myriad ways.

It is my delight to share the good news of Thomas Aquinas College and its promise for the future of Catholic liberal education. I invite you to investigate our unique academic program, our community of faith, and the joys of campus life. I encourage you to learn about our admissions process and our alumni,and to explore the many ways friends can support the College. And if you are in Southern California, or you can make the trip, I invite you to visit the campus, to experience our classes, and to see for yourself how we go about this noble mission of forming leaders in service of the truth.

Campus housing is available for undergraduates. Housing deposit is refundable in full if student does not enroll.. Freshman allowed to have car. No pets.

A program that is a structured combination of the arts, biological and physical sciences, social sciences, and humanities, emphasizing breadth of study. Includes instruction in independently designed, individualized, or regular programs.

Other Application Information: Please contact college for information about its use of SAT scores SAT or ACT

The average student pays $19,169 for tuition, fees, and other expenses, after grants and scholarships.

Total stated tuition is $24,500, in-state and on-campus, before financial aid.

75% of students receive some form of financial aid.

Estimate the net price for you at http://thomasaquinas.edu/admission/net-price-calculator-financial-aid-calculator.

72% of students graduated on time.

79% of students graduated in six years.

87% of full time students continued studying at this school after freshman year.