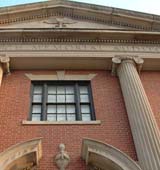 Medical University of South Carolina is college with 205 students located in Charleston, SC.

The Medical University of South Carolina has served the citizens of South Carolina since 1824. It has expanded from a small private college for the training of physicians to a state university with a medical center and six colleges for the education of a broad range of health professionals, biomedical scientists and other health related personnel.

When the Medical College of South Carolina was chartered by the South Carolina legislature on December 20, 1823 it became the tenth medical school in the United States and the first in the Deep South. Founded as a private, proprietary institution by members of the Medical Society of South Carolina, the college's early faculty bore full financial and curricular responsibility for the institution until 1913 when the state assumed ownership of the school.

The Medical College opened in 1824 with a faculty of seven Charleston physicians and thirty students. The first students graduated on April 4, 1825. The institution has served continuously since its founding, except for a four-year cessation during the Civil War, 1861--1865. Following the Civil War, the college was reorganized and continued to operate, at one point with as few as two students. The 1910 Flexner Report noted that there were 34 faculty, all part time, and 213 students whose fees were the only source of financial support for the school. In late 1913 the state legislature was successfully petitioned to transfer ownership of the school to the state. Incorporation of the medical college as a state institution brought public funding, and allowed teaching and service roles to expand steadily. By faculty resolution, resulting in an amendment to the charter in 1881, the Medical College created a Department of Pharmacy that was the first of its kind in the Deep South. The School of Pharmacy was organized in 1881, with students admitted a year later. The program was discontinued after two years, then resumed on a permanent basis in 1894, offering the degree of Graduate in Pharmacy. The program leading to a degree of Bachelor of Science in Pharmacy was begun in 1936. A Doctor of Pharmacy degree program was begun in 1973, and a PhD program in pharmaceutical sciences was initiated in 1982 (the latter administered through the MUSC College of Graduate Studies in collaboration with the University of South Carolina.) The MUSC College of Pharmacy, which has been in continuous service since 1894, matriculated its final class under the current program of study in 2005. It continued to operate as an individual College under the aegis of the Medical University of South Carolina until graduation of the class of 2009. Simultaneously, with the 2004 approval of the MUSC and USC Boards of Trustees, the College of Pharmacy integrated with the University of South Carolina to form a joint program through the South Carolina College of Pharmacy (SCCP) beginning with its first matriculated class in August 2006.

A program that prepares individuals to perform invasive, noninvasive, and peripheral examinations of the cardiovascular system at the request of physicians to aid in diagnoses and therapeutic treatments. Includes instruction in reviewing and recording patient histories and clinical data, patient care, investigative and examination procedures, diagnostic procedures, data analysis and documentation, physician consultation, equipment operation and monitoring, and professional standards and ethics.

Any instructional program in the health professions and related clinical sciences not listed above.