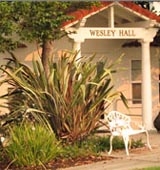 In 1944, Dr. Bebe Patten and her husband, C. Thomas Patten, conducted evangelistic services in the Bay Area. Thousands of people filled the Oakland Auditorium Arena (now the Henry J. Kaiser Convention Center) seeking purpose and meaning for their lives. Several hundred answered a call to active Christian service. Because of this response, Dr. Patten founded the Oakland Bible Institute, which was incorporated as a California nonprofit corporation.

The School was located for several years at its initial location, 1428 Alice Street. It moved to Telegraph Avenue in 1950, and then to the present campus on Coolidge Avenue in 1960. Later the school was renamed Patten University in response to its growth and expansion of academic programs and degree offerings.

While the University has continued to emphasize Bible and church-centered ministries, it has created options for students whose career interests lie in fields other than the professional ministry.

The University is supported by the Christian Evangelical Churches of America, Inc. (CECA), also founded in 1944 by Dr. Patten. This organization is a separate nonprofit corporation that establishes churches and ordains men and women to the ministry. Christian Cathedral, the CECA headquarters church located on the Patten University campus, provides some of the facilities used in the University program.

A program that focuses on the Christian and/or Jewish Bible and related literature, with an emphasis on understanding and interpreting the theological, doctrinal, and ethical messages contained therein. May include preparation for applying these studies in various religious vocations.

Directors, Religious Activities and Education
Plan, direct, or coordinate programs designed to promote the religious education or activities of a denominational group. May provide counseling and guidance relative to marital, health, financial, and religious problems.
Philosophy and Religion Teachers, Postsecondary
Teach courses in philosophy, religion, and theology. Includes both teachers primarily engaged in teaching and those who do a combination of teaching and research.

A program that is a structured combination of the arts, biological and physical sciences, social sciences, and humanities, emphasizing breadth of study. Includes instruction in independently designed, individualized, or regular programs.

An undifferentiated program that includes instruction in the general arts, general science, or unstructured studies.

Any instructional program in business, management, marketing and related support services not listed above.

Total stated tuition is $8,036, in-state and on-campus, before financial aid.

23% of students graduated on time.

19% of students graduated in six years.

20% of full time students continued studying at this school after freshman year.

Patten University participates in the NAIA Division I for college athletics.