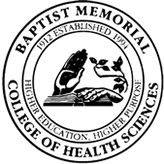 Education has been a key emphasis of Baptist Memorial Hospital from its beginning in 1912, as evidenced by the fact that the School of Nursing opened its doors at this same time. Approximately 4,700 diploma nurses graduated from the nursing school and are employed throughout the United States and abroad. The last diploma class graduated in May 1997. Baptist College now offers professional nursing education through the baccalaureate program, with two options available. One is for the generic student just beginning a four-year nursing degree, and the other track is an RN/BSN completion program for the licensed nurse. The College offers both a day and a night/weekend BSN program.

Radiological Sciences education began at Baptist Memorial Hospital in 1956 with the Radiography program. In response to the need for advanced specialization, Nuclear Medicine was added in 1961, Radiation Therapy in 1975, and Diagnostic Medical Sonography (Ultrasound) in 1986. Approximately 1,000 graduates of these hospital-based schools are employed in a variety of settings. The College offers baccalaureate majors in Medical Radiography, Diagnostic Medical Sonography (Ultrasound), Nuclear Medicine, Radiation Therapy, and Health Care Management.

A program that prepares individuals, under the supervision of physicians, to utilize medical ultrasound techniques to gather sonographic data used to diagnose a variety of conditions and diseases. Includes instruction in obtaining, reviewing, and integrating patient histories and data; patient instruction and care; anatomic, physiologic and pathologic data recording; sonographic data processing; sonography equipment operation; and professional standards and ethics.

The average student pays $8,885 for tuition, fees, and other expenses, after grants and scholarships.

Total stated tuition is $11,520, in-state and on-campus, before financial aid.

89% of students receive some form of financial aid.

Estimate the net price for you at http://www.bchs.edu.

38% of students graduated on time.

38% of students graduated in six years.

74% of full time students continued studying at this school after freshman year.