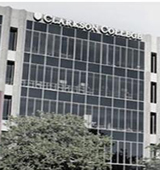 The institution known today as Clarkson College began as a dream of Bishop Robert H. Clarkson in the late 1800s. Bishop Clarkson wanted to see the establishment of a first-rate nursing school in Omaha, and the realization of his dream began in 1869 with the opening of Omaha's Good Samaritan Hospital.

After Bishop Clarkson's passing in 1884, his wife Meliora worked to complete his vision by establishing a training school for nurses, and the hospital became home to the Bishop Clarkson Memorial School of Nursing. The school graduated its first nursing class--a mere two graduates--in 1890.

As the school grew in enrollment, its offerings grew as well. Having started with only two-year programs, the Clarkson School of Nursing began offering three-year programs in 1902.

Enrollment continued to grow, and in 1917, when the first 10 Nebraska Red Cross Nurses were sent to France for service in World War I, half of them were Clarkson School of Nursing graduates.

Challenges loomed in the 1950s, as budget problems forced the nurses' program to close in 1955. It proved to be a bump in the road, as a generous donation from Mr. and Mrs. Peter Kiewit made it possible for the program to re-open in 1960.

Soon, Clarkson College Nursing graduates were once again helping America in its outreach to the world. In 1966, 11 graduates traveled to Vietnam as part of an 11-month tour.

Change and progress soon accelerated, as Clarkson College admitted its first male student in 1969, and male enrollment grew steadily throughout the 1970s.

During the 1980s, major accreditation came to Clarkson from leading bodies including the North Central Association and the National League for Nursing. This was followed in the 1990s by a major expansion of the programs offered at the College, including online education, Radiologic Technology, Physical Therapist Assistant and Health Care Business.

In 2004, the College opened its new Student Village campus, with first-rate residence hall facilities and a courtyard right across from The Nebraska Medical Center and Clarkson College academic facilities.

Today, Clarkson College continues its longstanding tradition of preparing its students to be the best--starting them on the path to fulfilling and rewarding careers in the field of health care. We look forward to carrying on this tradition for many years to come.

A program that focuses on the general study of business, including the processes of interchanging goods and services (buying, selling and producing), business organization, and accounting as used in profit-making and nonprofit public and private institutions and agencies. The programs may prepare individuals to apply business principles and techniques in various occupational settings.

Chief Executives
Determine and formulate policies and provide overall direction of companies or private and public sector organizations within guidelines set up by a board of directors or similar governing body. Plan, direct, or coordinate operational activities at the highest level of management with the help of subordinate executives and staff managers.
General and Operations Managers
Plan, direct, or coordinate the operations of public or private sector organizations. Duties and responsibilities include formulating policies, managing daily operations, and planning the use of materials and human resources, but are too diverse and general in nature to be classified in any one functional area of management or administration, such as personnel, purchasing, or administrative services.
Sales Managers
Plan, direct, or coordinate the actual distribution or movement of a product or service to the customer. Coordinate sales distribution by establishing sales territories, quotas, and goals and establish training programs for sales representatives. Analyze sales statistics gathered by staff to determine sales potential and inventory requirements and monitor the preferences of customers.
Administrative Services Managers
Plan, direct, or coordinate one or more administrative services of an organization, such as records and information management, mail distribution, facilities planning and maintenance, custodial operations, and other office support services.
Industrial Production Managers
Plan, direct, or coordinate the work activities and resources necessary for manufacturing products in accordance with cost, quality, and quantity specifications.
Transportation, Storage, and Distribution Managers
Plan, direct, or coordinate transportation, storage, or distribution activities in accordance with organizational policies and applicable government laws or regulations. Includes logistics managers.
Construction Managers
Plan, direct, or coordinate, usually through subordinate supervisory personnel, activities concerned with the construction and maintenance of structures, facilities, and systems. Participate in the conceptual development of a construction project and oversee its organization, scheduling, budgeting, and implementation. Includes managers in specialized construction fields, such as carpentry or plumbing.
Social and Community Service Managers
Plan, direct, or coordinate the activities of a social service program or community outreach organization. Oversee the program or organization's budget and policies regarding participant involvement, program requirements, and benefits. Work may involve directing social workers, counselors, or probation officers.
Managers, All Other
All managers not listed separately.
Cost Estimators
Prepare cost estimates for product manufacturing, construction projects, or services to aid management in bidding on or determining price of product or service. May specialize according to particular service performed or type of product manufactured.
Management Analysts
Conduct organizational studies and evaluations, design systems and procedures, conduct work simplification and measurement studies, and prepare operations and procedures manuals to assist management in operating more efficiently and effectively. Includes program analysts and management consultants.
Business Teachers, Postsecondary
Teach courses in business administration and management, such as accounting, finance, human resources, labor and industrial relations, marketing, and operations research. Includes both teachers primarily engaged in teaching and those who do a combination of teaching and research.

The average student pays $17,024 for tuition, fees, and other expenses, after grants and scholarships.

Total stated tuition is $11,596, in-state and on-campus, before financial aid.

77% of students receive some form of financial aid.

48% of students graduated in six years.

69% of full time students continued studying at this school after freshman year.